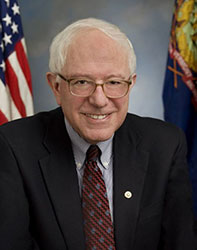 Know more about Senator Bernie Sanders (I-VT)
Bernard "Bernie" Sanders is an American politician who has served as the junior United States senator from Vermont since 2007 and as U.S. Representative for the state's at-large congressional district from 1991 to 2007.

Bernie Sanders (I) is an Independent US Senator, American activist, and political scientist.

Senator Bernie Sanders has served as a junior United States senator from Vermont. Bernard Sanders was born in the Brooklyn borough of New York City on 8 September 1941. His parents were Jews who belonged to a working-class family.

Sanders was into politics from his early childhood. He got his early education from P.S 197 and attended Brooklyn College for studies in 1959. In 1960, Sanders was transferred to Chicago University. In 1964, he got his Bachelor of Arts Degree in Political Science from Chicago University. Senator Bernie Sanders is a serving United States Senator from Vermont since 2007. He has been actively participating in politics since 1981 and has worked as a politician, activist, and political scientist.

He is widely renowned for his political role as a US Senator. He has served as U.S Representative for Vermont as an independent for 16 years. Although Sanders has been elected a majority of elections as an independent he caucuses with Democratic Party.

He has the honor to be the longest-serving independent in Congress. Sanders appeared in two presidential elections in 2016 and 2020. Unfortunately, he lost the election of 2016 to Hillary Clinton and suspended the presidential campaign of 2020.

Sanders joined the Young People’s Socialist League in college. He was active in the civil rights movement as a student of the Congress of Racial Equality and the Student Nonviolent Coordinating Committee.

Sanders went to a rally at the University of Chicago administration office and protested for days outside of the president’s office against racial discrimination.

He began his political career in 1971 as a member of the Liberty Union Party. He ran as the Liberty Union candidate for governor of Vermont. He ran for the U.S. House of Representatives where he came second. Sanders decided to run for Senate in 2007 after Sen. Jim Jeffords announced that he would not seek a fourth term. Sanders defeated Rich Tarrant by a 2-1 margin.

Sanders has actively participated in the process of legislation throughout his political career. He has proposed and forwarded plenty of amendments to many bills and laws to improve them. Due to this reason, many of his colleagues sometimes dubbed him as the “Amendment King.”

Sanders received some backlash at the time when the Paris attack coincided with the Democratic Presidential debate. Each candidate was provided one minute to share their statements on this tragedy. Sanders fails to show sympathy by turning the debate into an economical address.

I felt sorry for him because Bernie Sanders was just not good at playing politics – showing the right feelings at the right time to the right people. Most American voters will agree they want a president that is honest. But, when things seem different when the candidate is Sanders. He is known for not taking superPAC money and having unbendable values.

People criticized him for being unpalatable as a President and too idealistic about his policy platforms.

Middle-ground voters also considered Sanders’ policies to be too far left – making him largely unelectable. Attacks on him being too liberal to win the Democratic Primary are common places.

He is also known or more like hated, for his memorable 8.5 hour-long filibusters.

According to various resources on the internet like WealthyGorilla and Wealthy Genius, Bernie Sanders’s net worth is estimated to be around $3 million.

Sen. Bernie Sanders’s 2016 presidential campaign was a moral victory, unlike his 2020 campaign. Sanders ignited a movement that pulled the party in an unimaginable direction.