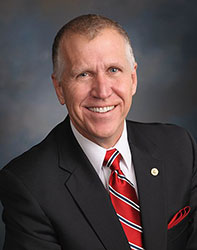 Know more about Senator Thom Tillis (R-NC)
Thomas Roland Tillis is an American politician serving as the junior United States Senator for North Carolina since 2015. A Republican, he was elected to the North Carolina House of Representatives in 2006, and Speaker in 2011.

Senator Thomas Rolland Tillis is an American politician. He has served as a junior U.S. Senator from North Carolina as a Republican since 2015. He was also a member of the North Carolina House of Reps.

Senator Thom Tillis was born on August 30, 1960, in Jacksonville, Florida. He was born to Margue and Thomas Raymond Tillis, a boat draftsman. In 1978, Tillis graduated from high school, after which he left home to get a job. He worked at an insurance company to computerize records. He also worked at Wang Laboratories in Boston. He attended Chattanooga State Community College. In 1996, Senator Thom Tillis graduated from the University of Maryland. There, he earned a Bachelor’s degree in Technology Management. After his graduation, Tillis worked at IBM and PriceWaterhouseCoopers (now PwC).

In 2002, Tillis began his political career in Cornelius. There, he contested for a local bike trail and won the town’s park board. In 2003, he was elected for the board of commissioners in Cornelius. After a two-year term as the commissioner, he reached for a seat at the general assembly. He defeated John W. Rhodes in the Republican primary and won the election. He was re-elected unopposed in 2008, 2010, and 2012.

He formally left IBM in 2009 and was a campaign chairman for the House Republican Caucus in 2010.

He worked on environmental development and preservation. During his time in the Senate, he voted for a renewable portfolio standard. This aimed to increase the state’s access to renewable energy. He also championed the protection of water from pollution.

As a North Carolina speaker of the House in 2011, he initiated the passage of the Justice Reinvestment Act, sweeping criminal justice reform legislation. He also successfully secured an initial down-payment of up to $1.18 billion in disaster relief funding for North Carolina. Tillis and Klobuchar helped veterans that were exposed to toxic burns. He worked on researching the health risks of the exposure. He also made efforts to efficiently and effectively treat the victims.

In early October 2020, it was reported that Sen. Thom Tillis had sent sexually suggestive texts and ads to a woman who wasn’t his wife, which he denied.

Tillis was criticized and called a racist for his suggestion that Hispanics are less likely to wear masks during the COVID pandemic. Tillis was also condemned for voting against the investigation of the U.S. Capitol attack.

According to OpenSecrets, Senator Thom Tillis has an estimated net worth of $11 million. His fortune stemmed from his political career and his positions as an executive at PwC and IBM. He also has more than $6 million in investment in Real Estate.

Since joining the Senate, Schatz has focused on helping workers, veterans, and people in Hawaii. He has made key legislative achievements in key sectors in the service of his people. But, Tillis was call out for being racist. He was also condemned for sexting a woman. He denied all allegations.