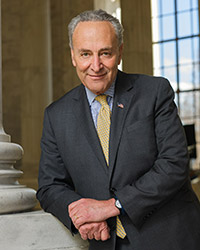 contact senator Chuck Schumer (D-NY)
Charles Ellis Schumer is an American politician serving as the Senate minority leader since 2017. A member of the Democratic Party, Schumer is the senior United States senator from New York, a seat to which he was first elected in 1998. He is the current dean of New York's congressional delegation.