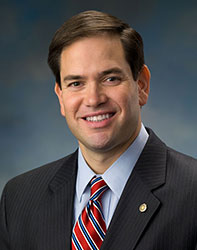 Contact Senator Marco Rubio (R-FL)
Marco Antonio Rubio is an American politician serving as the senior United States senator from Florida. A Republican, he previously served as speaker of the Florida House of Representatives.

Senator Marco Antonio Rubio is an American politician and lawyer.

Rubio was born in Miami, Florida, on May 28, 1971. He was born to native Cubans who migrated to the U.S. during the Fulgencio Batista dictatorship.

Senator Marco Rubio graduated from the South Miami Senior High School in 1989. Subsequently, he won a year football scholarship to Tarkio College in Missouri. Afterward, he enrolled at the Santa Fe Community College in Florida.

Senator Marco Rubio started his political career during his J.D. education as an intern for Republican U.S. Representative Ileana Ros-Lehtinen.

He also worked for Senator Bob Dole’s presidential campaign in 1996. After his J.D., he was elected to the West Miami City Commission. He served only one term at the Commission.

In 1999, Rubio campaigned as a moderate for a seat at the Florida House of Representatives. He was aspiring to represent the 111th House District. He won a runoff election for the Republican nomination and won the special election with 72% of the votes.

As a Senate Committee on Small Business and Entrepreneurship member, Rubio has advocated helping and supporting small businesses. He also wrote the Paycheck Protection Program. The program helped millions of small businesses and workers during the COVID-19 crisis. He was also a key figure in maintaining national security and effective foreign policy for America.

To bring effective and affordable healthcare to the grasp of Americans, Rubio voted to replace Obamacare with a better healthcare system. He also opposed increased taxpayer debt, a bloated budget, and worked to create jobs in the state. He is also an advocate for human rights protection

Rubio was accused of misusing a Republican party credit card. He mixed business and personal expenses when he was the speaker of the House of Representatives of Florida. But, Rubio claimed he made an analysis of the bill every month and paid for his personal expenses.

He was also called out for liquidating his retirement account. But, Rubio claimed he did it to make sure his family had cash while he was on the campaign trail