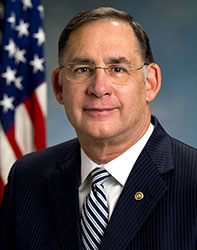 Contact Senator John Boozman (R-AR)
John Nichols Boozman is an American politician serving as the senior United States senator from Arkansas, a seat that he was first elected to in 2010. A member of the Republican Party, he previously was the U.S. Representative for Arkansas's 3rd congressional district from 2001 to 2011.

John Boozman, a successful businessman and life-long resident of Arkansas, has represented Arkansas in the United States Senate for six years, establishing a record as a strong supporter of the values and principles that Arkansans hold dearly. He will continue this same commitment to the people of the Natural State in his second term as your United States Senator.

If anyone embodies a twisted view of radical Islam, it is the Islamic State (ISIS) terror organization. These terrorists are devoted to establishing a new Caliphate, ruled by Sharia law, where all would be forced to convert or die. The growing strength of ISIS, along with al-Qaeda’s ongoing efforts to strike again, proves that radical Islamist terror organizations remain a serious threat at home and abroad. They are committed to destroying all who stand in their way. The US needs to be equally clear and unwavering in our commitment to destroy ISIS and end the spread of radical Islam.

I strongly oppose President Obama’s unilateral, and unconstitutional, actions to grant amnesty to millions of illegal immigrants and support efforts to turn back this power grab. We should not reward people for breaking the law. Anyone seeking to become a citizen should do so legally.

The path to immigration reform is to work with Congress, not around us. It starts with allocating the resources, surveillance technology and manpower necessary to ensure that individuals crossing our borders are doing so legally. No immigration reform policies we pass will be effective until we have a secure border and agents that are allowed to do their jobs. Adding more rules to the books without enforcing the ones we have will only make the situation worse.

As a nation, we should be proud of our record to naturalize those who immigrate here legally. We naturalize more new citizens per year than the rest of the world combined. Rewarding lawbreakers with amnesty is a disservice to all who followed the rules to become citizens. Some of those rules may need changing, but amnesty is not the solution.

As a small business owner for 24 years, I know the struggles it takes to get started, meet payroll and create jobs. Massive government mandates, such as Obamacare, only make the challenge more difficult.

That is why I support a pro-growth economic agenda. I will fight to rein in spending; reform our tax code so that it is fair for all; reduce the regulatory burdens imposed by government agencies; increase exports by approving pending free and fair trade agreements and create a new energy policy that allows us to use American resources that make us less dependent on foreign oil. The private sector, not Big Government, creates jobs.

Rein in Spending to Balance the Budget

Washington needs to get its financial house in order. Out of control spending is, as former Chairman of the Joint Chiefs of Staff Admiral Mike Mullen put it, the greatest threat to our nation’s sovereignty.

The only way will we get a handle on this situation is to reform the manner in which we budget and allocate federal dollars. We must institute a mechanism that will stop the government from spending beyond its means. This is the reason I support a Balanced Budget Amendment to the Constitution. If Arkansas can be required to balance our state’s budget, there is no reason Washington can’t do it.

Arkansans have been forced to make difficult decisions in this tough economy. To tell them that Washington can’t tighten its belt as well would be wrong and completely out-of-touch.

As a former small business owner and a healthcare provider, I understand how to approach the challenge of lowering the crippling costs of quality health care and create access for all Americans without stifling economic development. Obamacare is not the answer, which is why I voted against it and support efforts to replace and repeal this damaging law. Real healthcare reform should be enabled through free market principles. Let’s open up competition by allowing people to buy insurance across state lines. Let’s allow small businesses to pool their resources to get the best health care plans for their employees. These are common-sense policies that will bring real reform to our health care system without crippling our economy and adding unnecessary costs and burdens on the American people and job-creating small businesses.

The ability of decent, hard-working Americans to own a gun—whether for sport or protection—is enshrined in the Constitution and must never be compromised. Only a government that does not trust its citizens would refuse them the right to bear arms. Unfortunately, the knee-jerk reaction to national tragedies has led the Obama Administration to head in that direction. I have pushed back on every attempt to erode the rights of law-abiding citizens and will continue to fight for our Second Amendment rights.

Working for a Fair and Simple Tax Code

Our current income tax system is fundamentally flawed, outdated and in need of a complete overhaul. Today’s tax code is unfair, discourages against savings and investment, and is impossibly complex. I am committed to modernizing our tax code, eliminating the complexities and bringing relief to Arkansas’s families and business owners through commonsense tax reform. In doing so, we will create a pro-growth economic environment that will create successful new small businesses, bring more jobs to our communities and allow hardworking Arkansans to keep more the money they earn.

Instead of taking a stand for American workers and energy independence, President Obama continues to side with far-left special interests who are stalling the Keystone XL Pipeline, which has been proven, in test after test, to be one of the safest means of transportation for resources from one of our main allies. This is the type of commonsense, job creating infrastructure project that America needs. It will create well-paying jobs for skilled laborers, at no expense to the taxpayers, and in fact has already created hundreds of jobs in Arkansas, all the while helping get oil on the market from one of our closest allies. I will continue to work with my colleagues to get the Keystone XL Pipeline moving and make President Obama stand up for the interests of hardworking Americans, instead of a small group of vocal donors.

A Nuclear Iran is a Threat to U.S. and to Our Interests

Nothing short of full elimination of Iran’s nuclear program can honestly be considered a victory. Iran, the world’s most significant state sponsor of terror, has repeatedly called for the annihilation of Israel, our closest ally in the region, and would very much like to see the U.S. eliminated as well. In light of this threat, the bond we share with Israel is more important than ever. President Obama needs to work with his own Congress and the Israelis, to prevent the Iranian regime from continuing to work toward nuclear weapons while getting relief from international sanctions. If these talks fail to produce an agreement that requires that of Iran, Congress must have the authority to reject it.

Keeping Our Promises to Our Veterans

As the son of an Air Force Master Sergeant, I learned about the sacrifices our men and women in uniform make at an early age. This is why I fiercely advocate for policies that will enhance the quality of life for both our veterans and their families.

As a member of the Senate Veterans’ Affairs Committee, I have worked to pass laws that will improve health care services within the VA medical system, reduce veteran suicides and help veterans find well-paying jobs in their post-military service careers. My team has also assisted thousands of Arkansas veterans with problems they have faced getting the benefits they earned from the federal government. More work remains to be done and I am committed to holding Washington accountable for our promises to our veterans.

Agriculture is our state’s leading industry and accounts for nearly one-quarter of Arkansas’s economic activity. I will continue to work to ensure our policies provide economic certainty for Arkansas’s agricultural community, including efforts to open new international markets for our exporters. As a member of the Senate Agriculture Committee, I have worked with my colleagues to ensure we passed a Farm Bill that achieves real savings in mandatory spending, reduces and streamlines government programs and provides much-needed reform for the food stamp program.