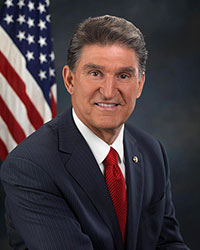 U.S. Senator Joe Manchin (D-W.Va.) was sworn into the United States Senate on November 15, 2010 to fill the seat left vacant by the late Senator Robert C. Byrd. For Senator Manchin, serving as West Virginia’s Senator is truly an honor and a privilege.

Born and raised in the small coal mining town of Farmington, W.Va., Sen. Manchin grew up learning the values that all West Virginians share — family, common sense, fairness and hard work. As a small businessman, he learned firsthand from his grandfather, Papa Joe, who was an Italian immigrant and the town grocer, the importance of serving the public. As a young man, his beloved grandmother, Mama Kay, inspired Senator Manchin’s belief in public service through her unflagging compassion and desire to help those less fortunate.

From his days as a state legislator to his six years as Governor to his current role, Senator Manchin has always been committed to his philosophy of “retail government” — in other words, connecting with all of his constituents and making service to them his top priority.

As a Senator, Joe Manchin is committed to bringing this same spirit of bipartisanship to Washington. As he has done throughout his entire life, he remains committed to working with Republicans and Democrats to find commonsense solutions to the problems our country faces and is working hard to usher in a new bipartisan spirit in the Senate and Congress.

Legislatively, job creation is Senator Manchin’s top priority and he believes that government should act as a partner, not an adversary, in helping to create the environment that produces good American jobs. Senator Manchin also firmly believes that our nation can and must do what he did in West Virginia - put our fiscal house in order. He believes we must find commonsense ways to cut spending while keeping our promises to our seniors and veterans by protecting Social Security and Medicare.

Senator Manchin is strongly committed to developing a balanced national energy plan that utilizes all of our resources and recognizes that fossil fuels will be a vital part of our energy mix for decades to come. He believes that a balanced, commonsense approach that considers the needs of our environment and the demands of our economy, can and must be developed if we are to achieve energy independence within this generation.

Senator Manchin is an avid pilot, outdoorsman, hunter, angler and motorcyclist. He has been married for more than four decades to the former Gayle Conelly of Beckley. They have three children: Heather, Joseph IV and Brooke, and are the proud grandparents of Joseph V, Sophie, Kelsey, Madeline, Chloe, Jack, Carly, Vivian, Beaux and Knox.

Senator Manchin served as Secretary of State from 2000 to 2004, and his office was known for excellent customer service. He was a state legislator from 1982 to 1996, where he earned a reputation for standing up for West Virginians.

Senator Manchin is an avid pilot, outdoorsman, hunter, angler and motorcyclist. He has been married for more than five decades to the former Gayle Conelly of Beckley. They have three children: Heather, Joseph IV and Brooke, and are the proud grandparents of Joseph V, Sophie, Kelsey, Madeline, Chloe, Jack, Carly, Vivian, Beaux and Knox.

Senator Joseph Manchin III (D) is an American politician. He has been serving as a senior U.S. Senator from West Virginia under the Democrats since 2010. He was the state’s Secretary of State from 2001 to 2005. He also served as West Virginia’s state governor from 2005 to 2010.

Manchin was born in Farmington, West Virginia, on August 24, 1947. He graduated from Farmington High School. He subsequently won a football scholarship and enrolled at West Virginia University in 1965.

Unfortunately, a severe training injury cut his football career short. Later, he earned a Bachelor’s degree in Business Administration in 1970. After his graduation, he worked at his family’s store and later at a carpet store.

Manchin started his political career in 1982.

In 1996, Manchin left the State Senate to run for the governorship. Unfortunately, he lost the Democratic primaries to Charlotte Pritt. Yet, he became the Secretary of State of West Virginia in 2000.

In 2003, Manchin announced his candidacy for the position of the state’s governor. He was looking to challenge Democratic incumbent Bob Wise. Bob Wise decided not to seek reelection after a scandal was leaked against him. As a result, Manchin won the Democratic primary and the general election in 2004 and served till 2010.

In 2010, incumbent Senator Robert Byrd died. Manchin announced his candidacy for the seat within a month. He won the Democratic primary and subsequently defeated John Raese in the general election.

After the end of Byrd’s term, Manchin ran for reelection and defeated Raese again. He was re-elected in 2018.

Manchin is moderate to conservative. He is said to have promoted bipartisanship while pushing for the state and national economy. He is credited for creating jobs, cutting government spending, and improving national security.

Manchin’s administration has fostered the development of a balanced economic plan. He has worked to ensure the proper use of resources as well as promoting the use of renewable energy.

Manchin also worked towards infrastructure developments such as the $2.7 million North Central West Virginia Airport. He also pushed for reliable air service in the state.

Manchin is commended for his work in introducing the Disaster Recovery Funding Act. The bill aimed at facilitating the release of $16 billion for disaster relief funding. He has also announced $106 million relief funding for West Virginia in 2019

Senator Manchin has been criticized for receiving unethical campaign funding from Mylan, where his daughter Heather Bresch served as the president and CEO of the drugmaker.

Heather Bresch is still mired in an ongoing lawsuit for colluding with the CEO of Pfizer to keep prices of EpiPen artificially high. The EpiPen is considered a lifeline for patients suffering from a severe allergic reaction.

Besides that, Senator Manchin was also reported by Andrew Hall from Patheos.com to have been cheating on his wife for over a decade with sexual relationships with the Republican party.

Senator Joe Manchin is also said to have some serious conflict of interest on climate reforms. At the moment, the US’s policy on climate change largely lies in the hands of Manchin. But, the fact that he owns millions of dollars in coal stocks makes people wonder if why is he not recusing himself from US climate talks?