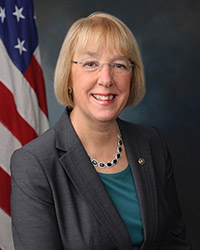 Know more about Senator Patty Murray(D-WA)
Patricia Lynn Murray is an American politician who has served as a United States Senator from Washington since 1993, and the senior Senator since 2001. A member of the Democratic Party, Murray previously served in the Washington State Senate and is Washington's first female U.S. Senator.

Senator Patricia Lynn Murray (D) is an American educator and politician. She has been serving as a senior U.S. Senator from Washington under the Democrats since 1993. She also served as a member of the Washing State Senate from 1989 to 1993.

Murray was born in Brothel, Washington, on Oct 11, 1950. She was born to an accountant mom and a war veteran dad. As a teenager, Murray and her family struggled financially. Her father became disabled after suffering from multiple sclerosis.

She worked as welfare assistance to keep up with her family’s financial status. She also worked as an intern in a Veteran Psychiatric Hospital while in college. She graduated from Washington State University with a B.A. in Physical Education in 1972. She also got married to her husband the same year. After her Bachelor’s degree, she taught parenting skills at Shoreline Community College. She taught from 1984 to 1987.

Murray oversaw a community effort to save endangered school programs. She subsequently started her political career and won a seat at the Shoreline School District Board of Directors. She served from 1985 to 1989.

After her service at Shoreline, she won a seat at the Washington State Senate. She unseated incumbent Republican State Senator Bill Kiskaddon. She served in the state Senate till 1993. In 1992, Murray ran a grassroots campaign. She gained grassroots support to repeal the proposed preschool program budget cuts.

In the general election, she defeated a five-term Republican Representative. She took office the following year and has been re-elected four times. She has also declared her intention to run for the sixth time in the 2022 general election.

During her political career, Murray has served in various capacities in the Senate. She also served as the Secretary of the Senate Democratic party from 2007 to 2017.

Murray has worked to improve access to quality healthcare in her state. She also worked to expand coverage for women’s health.

She was also a key figure in formulating immigration legislation. She voted in favor of the Comprehensive Immigration Reform Act of 2006.

She has also worked for the improvement of the state and national economy. She has created new jobs and supported the growth of small and medium-scale businesses. She also led a party effort to ensure an increase in the minimum wage. Murray has also worked to secure a free-trade agreement. She was also instrumental in international trade bills and foreign policies.

Murray’s administration also focused on environmental and infrastructural development. She co-sponsored legislation to create the Wild Sky Wilderness in Washington. She also supported legislation to increase the size of the Alpine Lakes Wilderness.

Senator Patty Murray got under fire for allegedly voting to allow Viagra for sex offenders. This was disclosed in a video produced by one of her Republican opponents.

Before the allegations surfaced, Senator Coborn introduced an amendment that would prohibit coverage of Viagra for sex offenders. But, Murray voted against the amendment.

Senator Murray was also criticized for refusing to vote on creating an independent commission to investigate the Jan 6 insurrection. But she cited a personal family issue for her abstention.

According to OpenSecrets, Senator Patty Murray’s estimated net worth is $1.7 million.

Murray is a moderate to a liberal politician who has spent more than two decades fighting for Washington State in the Senate. She has been tenacious in addressing the needs of her people.

But she was criticized for voting to allow Viagra for sex offenders. She was also condemned for her abstention on creating an independent commission for the Jan 6 insurrection.