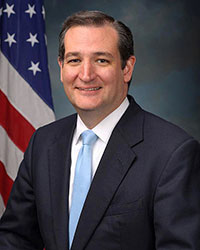 contact senator Ted Cruz (R-TX)
Rafael Edward Cruz is an American politician and attorney serving as the junior United States Senator for Texas since 2013. He was the runner-up for the Republican presidential nomination in the 2016 election. Cruz holds degrees in public policy and law from Princeton University and Harvard Law School, respectively.

Ted grew up in Texas. His father, Rafael, fled Cuba after being tortured and imprisoned and came to Texas with just $100 sewn into his underwear. Rafael got a job washing dishes making 50 cents an hour and learned English. He worked hard and attended the University of Texas at Austin, earning a degree in mathematics. He later started a small business in the oil and gas industry. Today, Rafael is a pastor in Dallas.

Ted’s mother, Eleanor, was born in Delaware to an Irish and Italian working-class family. She became the first in her family to go to college, graduating from Rice University with a degree in mathematics. She broke boundaries at Shell as one of the few women working as a computer programmer at the dawn of the computer age.

Ted earned his undergraduate degree from Princeton and his law degree from Harvard Law School. After law school, Ted clerked for Chief Justice Rehnquist and then worked in private practice. In 1999, Ted joined George W. Bush’s campaign for president as a domestic policy advisor. The best thing about Ted’s experience on the Bush-Cheney campaign, by far, was meeting Heidi Nelson, who also worked on the policy team. Heidi and Ted married after the campaign.

After working at the Department of Justice and the Federal Trade Commission during the Bush administration, Ted moved back home to be the Solicitor General of Texas. As Solicitor General, Ted argued eight cases before the Supreme Court of the United States, and defended our freedom of speech, our right to keep and bear arms, and our religious liberty in courts across the nation. Following his service as Solicitor General, Ted returned to private practice, where he continued to litigate high stakes cases and argued his ninth case before the Supreme Court.

US SENATOR FOR TEXAS

In 2013, Ted was sworn into the United States Senate, where he has been a passionate fighter for limited government, economic growth, and national security. He has authored dozens of legislative measures that have been signed into law, including expanding 529 college savings accounts to allow parents to save for K-12 public, private, and religious education, repealing Obamacare’s individual mandate, imposing sanctions on terrorists who use civilians as human shields, designating North Korea as a state sponsor of terrorism, targeting Putin’s Nord Stream 2 pipeline through multiple bills that halted construction and kept it stalled, reauthorizing and reforming NASA, holding dictatorships in South America accountable, and ensuring the availability of additional records to help solve civil rights cold cases.

He is also leading the fight in the Senate to support Texas jobs, rein in Big Tech, secure the border, and fundamentally reassess the U.S.-China relationship and hold the Chinese Communist Party accountable for covering up the coronavirus pandemic, committing human rights atrocities, and engaging in censorship, propaganda, and espionage in the United States.