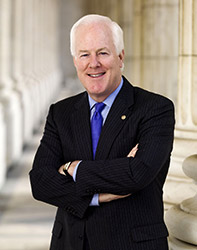 Contact Senator John Cornyn (R-TX)
John Cornyn III is an American politician and attorney serving as the senior United States Senator for Texas since 2002. He was the Republican Senate Majority Whip for the 114th and 115th Congresses. Cornyn also previously served as Chair of the National Republican Senatorial Committee from 2007 to 2011.


In 2020, Texans overwhelmingly re-elected Senator John Cornyn to represent them for a fourth term in the U.S. Senate. Since he was first elected in 2002, Sen. Cornyn has earned a national reputation as an articulate and powerful voice for Texas and conservative values in Washington. Sen. Cornyn, a San Antonio native, strongly believes that we need more Texas solutions in Washington, which is why he consistently fights to bring the Lone Star State’s commonsense solutions to thefederal level.

He has committed himself to strengthening our national defense, securing our borders, repairing our broken immigration system, and strengthening the economy by keeping taxes low, reducing federal spending, and fighting job-killing regulations from Washington bureaucrats. Sen. Cornyn has also been a tireless advocate for Texas military personnel, veterans, and their families, and he has fought to provide these brave Americans with the best possible support, care, and benefits.

Sen. Cornyn serves on the Senate Finance, Intelligence, and Judiciary Committees, where he helps craft legislation on behalf of 29 million Texans. From 2013 until 2018 Sen. Cornyn was chosen by his colleagues to serve as the Whip, the second-highest ranking position in the Senate Republican Conference. Sen. Cornyn has served the people of Texas for the nearly four decades, first as a district judge and later as a member of the Texas Supreme Court and Texas Attorney General. He received his undergraduate degree from Trinity University, his law degree from St. Mary’s School of Law, and his LLM from the University of Virginia Law School.

Sen. Cornyn married his wife Sandy in 1979, and they have two grown daughters.