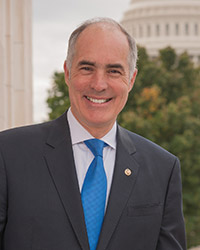 Know more about Senator Bob Casey
Robert Patrick Casey Jr. is an American attorney and politician serving as the senior United States Senator from Pennsylvania, a seat to which he was first elected in 2006. He previously served as Pennsylvania Auditor General from 1997 to 2005 and as Pennsylvania Treasurer from 2005 to 2007.

Senator Robert Patrick Casey is an American politician and lawyer. He has been serving as a senior U.S. Senator from Pennsylvania under the Democrats since 2007. He was the state’s Auditor General from 1997 to 2005. He was also the state’s Treasurer from 2005 to 2007 before his election to the Senate.

Senator Bob Casey was born in Scranton, Pennsylvania, on April 13, 1960. He was of Irish descent and one of the children of the former Governor of Pennsylvania, Bob Casey. He graduated from the Scranton Preparatory School in 1978 and enrolled in college. He attended the College of Holy Cross and graduated in 1982. After his college education, he became a member of the Jesuit Volunteer Corps. There, he taught fifth grade.

Senator Bob Casey received his J.D. from the Columbus Law School in 1988. He also coached a basketball team at the Gesu School in Philadelphia. After his J.D., Casey started a private law practice in Scranton from 1991 to 1995.

Casey started his political career when he ran for Pennsylvania’s Auditor General in 1996. He assumed office in 1997 and was re-elected in 2000. He served till 2005.

Casey decided to follow in his father’s footsteps and delved into the gubernatorial race of the state. Fortunately for him, the Pennsylvania Democratic party supported him. But, he lost his primaries to former Mayor Ed Rendell.

Yet, he continued his service as the Auditor General till 2005 when he decided to run for the State’s Treasurer. He was elected and served till 2007. In 2005, Congressmen Schumer and Harry Reid persuaded Casey to run for a seat in the U.S. Senate. He was endorsed by several congressmen and subsequently launched his campaign. He was also endorsed by his former gubernatorial opponent, Ed Rendell. Casey defeated the incumbent Republican governor Rick Santorum. He was re-elected in 2012 and 2018.

Casey’s administration has worked towards raising wages and supporting businesses across the state. He is also a member of the Senate Ageing Committee. He focused on policies and legislation to support and meet the needs of elder and disabled people.

Besides, Casey is renowned for his unrelenting support for children. He introduced the Child Care for Working Families Act. The bill saw the creation of 770,000 child care jobs. He also created the Five Freedoms for America Children. Casey’s administration worked to boost the state’s economy by creating jobs and supporting local businesses. He has also passed a bill to ensure that small businesses thrive in the state. He voted for a tax cut and extending tax breaks.

He also advocated for infrastructural development. He believed good infrastructure boosts the economy. He also worked towards increased investment in the transport network of the state.

Apart from all these, Casey is an avid environmental protection advocate. He opposed the exploration of the Arctic National Wildlife Refuge for oil. He believes that oil exploration can cause pollution. He supported the use of alternative fuel and hybrid tech for energy.

Senator Casey was part of the Senators that voted for the indictment and conviction of Trump. His decision came after Trump faced charges of an indictment of an insurrection.

According to OpenSecrets, Senator Casey is worth an estimated $610,000

Senator Casey is a strong advocate of economic development. He has fought for the improvement of the lives of his people through various legislative means. He has also worked to meet the needs of workers, children, and families.