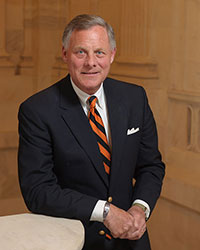 Contact Senator Richard Burr (R-NC)
Richard Mauze Burr is an American politician who is the senior United States Senator from North Carolina, serving since 2005. A member of the Republican Party, Burr was previously a member of the United States House of Representatives. Born in Charlottesville, Virginia, Burr is a graduate of Wake Forest University.

First elected to the U.S. House of Representatives in 1994, Richard served five terms in the House and is currently serving North Carolina in his third term in the U.S. Senate. During his time in the House, he led legislation modernizing the U.S. Food and Drug Administration (FDA), and began his work to improve our nation’s biodefense and pandemic preparedness capabilities.

In the Senate, Richard serves as Ranking Member of the Health, Education, Labor, and Pensions Committee. Promoting innovation in America’s healthcare system has been a priority for him throughout his time in Congress. Richard has led on a number of significant legislative priorities, including the creation of today’s pandemic response framework through the passage and reauthorization of the Pandemic and All-Hazards Preparedness Act (PAHPA), improving FDA’s ability to regulate cutting-edge treatments for patients, and consistently championing funding for medical innovation and research.

Richard has also been a leader in education policy. In 2013, the government was set to double interest rates on student loans. Richard worked with a group of his colleagues to write the Bipartisan Student Loan Certainty Act. This bill, which is now law, dramatically reduced interest rates for students who have school loans. Nationally, this law has saved nearly $100 billion for students and their families.

Protecting and honoring human and civil rights is another area where Richard has led legislatively. Richard spearheaded the passage of the Stephen Beck, Jr. Achieving a Better Life Experience (ABLE) Act. This legislation allowed for individuals with disabilities to save money in their own name without losing critical benefits, including health care. In 2014, the ABLE Act was signed into law, and was widely regarded as the most significant legislative accomplishment for individuals with disabilities since the passage of the Americans with Disabilities Act (ADA). In 2016, Richard worked with the late civil rights leader, Representative John Lewis (D-GA) to reauthorize the Emmett Till Unsolved Civil Rights Crimes Reauthorization Act. The passage of this bill provided a critical opportunity to right the wrongs committed against African Americans that were never investigated during the Civil Rights Era.

An avid outdoorsman, Richard has also taken steps to ensure the promise of America’s national parks will be guaranteed to the next generation. In 2020, Richard led a bipartisan group of senators in passing the Great American Outdoors Act, landmark conservation legislation that fully and permanently funds the Land and Water Conservation Fund (LWCF).

In addition to leading Republicans on the HELP Committee, Richard also serves as a senior member of the Select Committee on Intelligence, the Finance Committee, and the Special Committee on Aging.

The son of a minister, Richard and his family moved to Winston-Salem, North Carolina when he was a young child. He attended Wake Forest University on a football scholarship, and after graduating, he began his career far from the halls of Congress by spending seventeen years in business with Carswell Distributing, a wholesale commercial products company.

He also serves as a Board Member of Brenner Children’s Hospital and on the West Point Board of Visitors. Richard and his wife, Brooke, have two sons.

Every North Carolinian should graduate high school ready for college or a career. I believe decisions about our children’s education are best made by those who are closest to the classroom – parents, teachers, and local representatives. That’s why I fought to end federal mandates like Common Core and No Child Left Behind.

When it comes to higher education, North Carolina is home to some of the finest colleges and universities in the world, and our institutions of higher learning graduate among the largest number of students of any state in the country. I proudly co-authored the Bipartisan Student Loan Certainty Act, a law that has saved Americans roughly $46 billion in student loan costs over the last three years. I am continuing to work in a bipartisan fashion to offer proposals that make college tuition more affordable and address student loan debt.

Also important to working families is the ability to find affordable, quality child care. As a member of the Senate, I have successfully fought to pass legislation to improve the safety, affordability, and quality of child care so that our kids are in good hands during the work day and prepared for elementary school.

During my time in the Senate, I have introduced, supported, and passed legislation to combat rape and sexual assault, to stop human trafficking, and to protect the most vulnerable members of society, our children. Examples include my Military Sex Offender Reporting Act, a law that closed a legal loophole that had allowed convicted military sex offenders to recommit their heinous crimes. I introduced and championed the passage of the Kilah Davenport Child Protection Act, a law aimed at ensuring that there are appropriate criminal penalties for those who abuse children. I have also worked to end human trafficking and to assist victims by actively supporting the Trafficking Victims Protection Act.

Since first coming to Congress, I have understood that our country needs health care reform. Unfortunately, the Affordable Care Act, also known as Obamacare, has resulted in skyrocketing insurance premiums and fewer choices for Americans. That’s why I have put forward the Patient CARE Act as an alternative plan that would expand access to quality, affordable health care without the federal government’s command and control. PCARE puts Americans – not Washington bureaucrats – in control of their own health care decisions for themselves and their families.

Similarly, our citizens are proud of the medical innovation that has made America the envy of the world when it comes to life-saving treatments and cures. We must preserve America’s global leadership in biomedical research and innovation, and I believe we must continue to foster and facilitate this critical work so that America’s patients benefit from the most-cutting edge treatments.

The desire to succeed and participate in our economy is at the heart of the American Dream. Unfortunately, the ability of Americans to find a job and provide for their families is too often hampered by government policies that punish work and saving. That’s why I support efforts like tax reform, which would end special interest tax loopholes, promote job creation, and make the federal tax system less burdensome on working families and small businesses.

Since September 11, 2001, our nation has been combatting enemies who seek to threaten and eventually destroy our exceptional country. While the threat in recent years has come primarily from radical Islamic terrorists, we have also witnessed the emergence of an aggressive Russia with ambitions to undermine our longstanding alliances abroad.

As a member of the Senate Intelligence Committee, I am committed to ensuring that our troops, law enforcement, and intelligence professionals have the tools and the support they need to keep America safe.

North Carolina is home to the third largest community of veterans and military retirees in the nation. Our state is also home to some of America’s premier Army, Air Force, and Marine Corps quick response forces, as well as the ready reserve forces in our National Guard. North Carolina has a proud tradition of welcoming veterans, active-duty troops, and their families, and I am committed to ensuring that these patriots and their loved ones receive the world-class health care, resources, and support they have earned in service to our country.

From the Blue Ridge Mountains to the Outer Banks, North Carolina is home to some of America’s most visited natural treasures. Conservation is key not only to our rich cultural history but also our growing outdoor recreation economy. People from all over the country come to enjoy and experience North Carolina’s diverse natural landscape.

That’s why it is important that we protect these resources for future generations. In the Senate, I am fighting to preserve the Land and Water Conservation Fund (LWCF), our nation’s oldest and most successful conservation program that does not cost taxpayers a dime. The wild horses along North Carolina’s coast are a part of our storied history, and I am working to ensure these precious animals are protected.

North Carolinians understand what “living within their budget” means. This has not been the case in Washington, where annual deficits continue to mount. It is imperative that Washington follow the example of North Carolinians and begin to make tough choices and prioritize spending decisions.