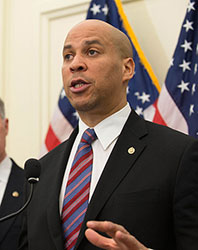 Here you will find contact information for senator Cory A. Booker, including email address, phone number, and mailing address.

Know more about Senator Cory Booker(D-NJ)
Cory Anthony Booker is an American politician, attorney, and author who has served as the junior United States Senator from New Jersey since 2013. A member of the Democratic Party, Booker is the first African-American U.S. Senator from New Jersey. He was previously the 38th Mayor of Newark from 2006 to 2013.

Senator Cory Anthony Booker is an American attorney, author, and politician. He has served as a junior U.S. Senator from New Jersey since 2013. He served as the 38th Mayor of Newark. He also served on the Municipal Council of Newark.

Booker was born in Washington DC on April 27, 1969. He was born to IBM executive parents. But his family relocated to New Jersey, where he attended the Northern Valley Regional High School.

In 1991 he graduated from Stanford University with a B.A. degree in Political Science. He also got a Master’s degree in Sociology the following year. He was featured at the All-Pacific-10 Academic team as a footballer for Stanford. He also ran a student-run crisis hotline while at a tertiary institution. Booker was awarded a Rhodes Scholarship, and he went to study at Oxford University. There, he earned a Bachelor’s degree in History in 1994. At Oxford University, he was the President of the Oxford University L’Chaim Society. In 1997, he earned his J.D. from Yale Law School.

Booker started his political career after his J.D., where he served as a staff attorney for the Urban Justice Center in NYC. He also worked as a program coordinator of the Newark Youth Project.

In 1998, Booker ran for a seat at the Municipal Council of Newark and recorded a shocking victory over a four-term incumbent. During his tenure, Booker focused on combating the problem of drug abuse and high crime rates in Newark. In 2002, Booker announced his desire to run for the Mayor of Newark. But he was defeated by incumbent Sharpe James. However, he announced his second bid for the Mayor in 2006. Fortunately, he won the position with 72% of the votes. He was elected again in 2010.

In 2012, Booker announced his desire to run for a seat in the U.S. Senate. However, the incumbent, Frank Lautenberg, announced he would not seek reelection. While in office, Lautenberg died in 2013, and Booker won a special election to the seat. He won again in 2014 and 2020.

In 2019, Booker announced his campaign for the Democratic nomination for the U.S. President in the 2020 elections. However, he dropped out after failing to meet the polling threshold to participate in the sixth debate in 2019.

Booker has worked relentlessly to ensure a more fair justice system. He has also worked to end mass incarceration and help pass bills and reforms on criminal justice.

Booker also worked for the expansion and improvement of economic activities in the state. His administration fostered job provision, wage increment, limitation of corporate concentration, and a crackdown on some corporate practices.

To provide affordable and quality healthcare for the people of New Jersey, Booker has fought fervently for the protection and uphold of the Affordable Care Act. He has also championed building laws and reforms to increase access to healthcare at a lower cost.

Booker also got himself in trouble as he planned to contest for the post of President.

In one of his articles which he titled “So much for stealing seconds,” Cory Booker, in his interests, wanted to explain how he grew up and how he has learned that his behavior is awful. But it is so disappointing that an aspiring president had gotten involved in sexual assault during his days at Stanford.

He was criticized for his alleged stealing and wasting public funds under his watch.

According to CelebrityNetWorth, Senator Booker is worth an estimated net worth of $3 million. Apart from his salaries from his political career, Booker has assets worth over a million dollars. He also has stocks in tech companies like Netflix, Facebook, eBay, and Amazon.

Booker is one of the typical well-educated senators coming from fancy schools and a great career. He has emerged as a national leader to solve day-to-day problems facing the people of the U.S. and New Jersey.

As a Senator, Booker has employed an innovative and consensus-building approach toward serving his people. But, Booker has faced charges of financial misconduct. He was also under fire for sexually assaulting a mate at Stanford. No criminal record or legal actions have been brought forward.