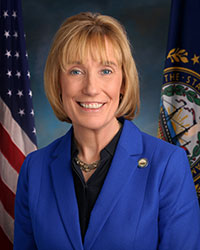 Contact Senator Maggie Hassan (D-NH)
Margaret Coldwell Hassan is an American politician and attorney serving as the junior United States Senator from New Hampshire. A Democrat, Hassan was elected to the Senate in the 2016 election while she was serving as the 81st Governor of New Hampshire, an office she held from 2013 to 2017.

Senator Margaret Coldwell Hassan is an American attorney and politician. She is serving as a junior U.S. Senator from New Hampshire under the Democrats since 2016. She had also served as the 81st governor of the state from 2013 till 2017.

Senator Maggie Hassan was born in Boston, Massachusetts, on February 27, 1958. She was born to a politician and political scientist dad. Maggie grew up in Lincoln, where she attended the Lincoln-Sudbury Regional High School.

She enrolled at Brown University, where she graduated with a B.A. degree in History in 1980. She proceeded and earned a J.D. from the Northeastern University of Law in 1985.

After her Bachelor’s degree, Maggie worked for the Massachusetts Department of Social Services. After her J.D., she worked as an attorney from 1985 to 1999. She was also the Assistant Counsel for the Brigham and Women’s Hospital in Boston.

In1996, Senator Maggie Hassan started working as an attorney for a corporate defense and business law firm in Boston. Three years later, Governor Shaheen appointed her as a member of an Advisory Committee

Maggie started her political career in 2002. Then, she ran for a seat at the state Senate after several encouragements from Democratic officials. She lost the race to the then incumbent, Senator Russell.

Maggie ran again in 2004 and defeated Prescott. She won again in 2006 and 2008. While at the Senate, she served as the assistant Democratic Whip. She was also the Majority leader and the President pro tempore. But, she lost her seat back to to the Republican nominee, Prescott, in 2010.

In 2011, Maggie announced her intention to occupy the seat of the state governor. Endorsed by former President Bill Clinton, Maggie won the primaries. She also defeated Republican nominee Ovide Lamontagne. She assumed office in 2013 and won again in 2014.

After her tenure as a governor, she announced her candidacy for a seat in the U.S. Senate. Considered one of the most competitive U.S. races of the year, Maggie looked to unseat Republican incumbent Kelly Ayotte. She won by a margin of 1,000+ votes. She has announced her desire to run again in 2022.

Hassan has worked relentlessly to improve the state’s economy through job creation and the expansion of small businesses. Her administration was renowned for her hard work towards combating drug abuse. She also worked to end the opioid crisis as well as heroin and fentanyl abuse.

As part of her bid to develop the state’s economy, she expanded job opportunities and helped innovative businesses grow. She has also worked to build a more innovative economic future to support people and families.

Her administration also boasts of strengthening national security and promoting social security. She also ensured the improvement of veteran welfare.

Apart from these, Hassan’s administration supported Medicare as a bid to improve access to healthcare. She also worked to promote human and women’s rights protection

From 2009 to 2015, Sen. Maggie Hassan’s husband was the principal of Phillips Exeter Academy. During his term as a principal, a longtime teacher, Rick Schubert, admitted to sexual misconduct with two students. Yet, he was dismissed, and the allegations were not made to the public.

But when the allegations resurfaced, Maggie was condemned for naming Schubart as one of the hundred leaders that supported her. Her husband was also criticized for burying the allegations. Maggie and her husband pleaded to the public for enough reasons.

Senator Hassan was also under fire when one of her staffers allegedly used her computer to steal private info. The staffer, Jackson Cosko, was charged for identity theft and misuse of a government computer.