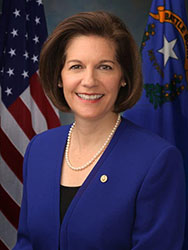 Contact Senator Catherine Cortez Masto (D-NV)
Catherine Marie Cortez Masto is an American lawyer and politician who is the senior United States senator from Nevada since 2017. A member of the Democratic Party, she was the 32nd attorney general of Nevada from 2007 to 2015. Cortez Masto graduated from University of Nevada, Reno and Gonzaga University School of Law.