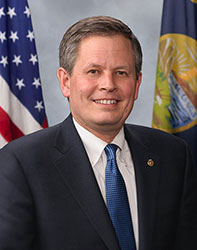 contact senator Steve Daines (R-MT)
Steven David Daines is an American politician and former corporate executive serving as the junior United States Senator for Montana since 2015. A Republican, he served as the U.S. Representative for Montana's at-large congressional district from 2013 to 2015.

Steven David Daines is a U.S Senator from Montana. He has worked as a corporate executive in Procter & Gamble and RightNow Technologies. He won his Senate Seat from Montana and entered the upper chamber of the United States Congress in 2014.

He has worked as the Junior United States Senator for Montana for 3 years. Daines won the reelection of Senate in 2020 by defeating his republican counterpart.

He switched his professional career to only politics. Daines got his early education and graduation from Bozeman High School. He graduated from Montana State University as a Chemical Engineer.

(Source: C-span) Daines was into politics from his early educational career. He was the student body president during his graduate studies at Bozeman High School. Daines got a B.S Degree in Chemical Engineering from the State University of Montana.

After completion of his studies, Daines stepped into his professional career. He has worked for around 13 years in top private organizations. In 2012, Daines left his job and focused his full attention on a new political career. Steven Daines was into politics from the days of high school. He was the representative of students as President of Montana State University. He has worked as a private employee for 25 years.

Daines first represented Montana as the delegate at the Republican National Convention. He has also served as the state chairman of Mike Huckabee’s presidential campaign of 2007-08. He took part in the 2008 gubernatorial election for lieutenant governor of Montana.

He was defeated by Democratic Governor Brian Schweitzer. He also took part in the 2012 elections for the U.S House of Representatives. He won the elections by beating his opponent Kim Gillan. In 2014, Daines won the General Elections by defeating Amanda Curtis to become a United States Senator from Montana. In 2020, he beat the democratic nominee Steve Bullock in the reelections by securing 55% of the vote.

He passed the most significant public lands bill for Montana in over 30 years. He was ranked the most effective first-term House member in 2013 and again in 2014.

Steve Daines was criticized for his anti-socialism resolution which he introduced in the Senate. Socialism seemed to be a threat to freedom to him. People suggested that he should talk face to face with his constituents instead of introducing such resolutions.