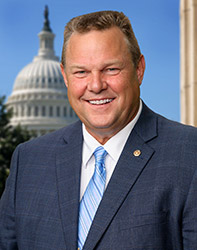 Contact Senator Jon Tester (D-MT)
Raymond Jon Tester is an American farmer and politician serving as the senior United States Senator from Montana. Tester was first elected to the Senate in 2006, defeating Republican incumbent Conrad Burns in one of the closest Senate races of that year.

Raymond Jon Tester is an American farmer and politician. He is currently serving as a senior United States Senator from the state of Montana. He was born in Havre, Montana, and grew up in Chouteau County, Montana. He graduated from the University of Providence. He got a B.A. degree in music from the College of Great Falls.

After graduating, Tester took over his family farm. He was also a music teacher at F.E. Miley Elementary school. He worked his way up to the Big Sandy School board.

Senator Jon Tester ran for the Montana Senate in 1998 after his neighbor who was a Republican Senator decided not to run for re-election. Because of his service on the Big Sandy school board, he was elected the minority whip in 2001. He was re-elected in 2002.

In 2003, Tester became the minority leader. He served as a “holdover” for the 15th district because of redistricting in 2004. He was elected as president of the Montana Senate in 2005.

Tester chose to run for the U.S. Senate seat in 2005 which was held up by Senator Conrad Burns.

Tester had a greater following among fellow legislators but Burns was able to raise more money and he had great recognition. Tester won the Democratic nomination in a six-way primary. He won the November 2006 election by a close margin and defeated Burns.

Tester ran for re-election in 2012 and won successfully. In 2018, he ran for a third term against Republican Matt Rosendale. He won the election.

Senator Jon Tester is reported as the third most moderate Democrat in the Senate. He has hosted hundreds of small business opportunity workshops for the people of Montana and he has made it possible for Veterans to get quality healthcare no matter where they live.

Jon is the top Democrat in the Veterans’ Committee.

In 2004, Conrad Burns criticized Tester for opposing the Patriot Act. He was also criticized by Trump because of his false allegations towards a White House doctor who was up in line to lead the Department of Veteran Affairs