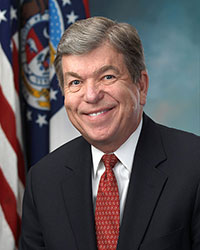 contact senator Roy Blunt (R-MO)
Roy Dean Blunt is an American politician who is the senior United States Senator for Missouri, serving since 2011. A member of the Republican Party, he previously served as a member of the United States House of Representatives and as Missouri Secretary of State.

Roy Dean Blunt is an American Politician. He is serving as a Senior Senator for the state of Missouri. He previously served as a member of the U.S. House of Representatives and Missouri Secretary of State.

Roy Blunt’s political career started by working as a county clerk and chief election official in 1973. He served in this position for a total of 12 years. Blunt decided to run for an open seat for governor in 1980. He managed to win the Republican Primary but lost the general election by 56%-44%.

Blunt ran for the position of Missouri Secretary of State in 1984 after the retirement of incumbent Democrat James Kirkpatric. He defeated Democrat Gary D. Sharpe and became the first Republican to hold this post in the past 50 years.

Blunt chose to run for the U.S. House of Representatives in 1996. He ran in Missouri’s 7th congressional district. He won the Republican Primary and defeated Democrat Ruth Bamberger in the general elections.

Blunt has announced this year that he will not run for re-election in 2022.

Blunt’s most significant legislative accomplishments had democratic co-sponsors. He helped in passing bills in the Senate that helped save Veterans from paying unethical fees while filing disability claims.

In 2006, Blunt was listed as one of the most corrupt members of Congress by a magazine called Multinational Monitor. Blunt was directly tied to the Jack Abramoff scandal and he was known for secretly trying to insert provisions in legislation for his own benefit at the expense of competitors.