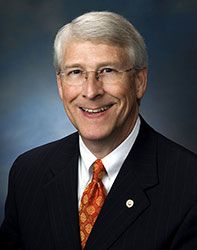 Know more about Senator Roger Wicker(R-MS)
Roger Frederick Wicker is an American attorney and politician who is the senior United States Senator from Mississippi, in office since 2007. A member of the Republican Party, Wicker previously served as a member of the United States House of Representatives and the Mississippi State Senate.

Roger Frederick Wicker is a senior American attorney and politician. He was born on July 5, 1951, in Pontotoc, Mississippi. He is currently serving as the senior U.S Senator from Mississippi for the last fifteen years.

Sen. Wicker is a native of Mississippi and the son of a former Circuit judge Fred Wicker.

Wicker is a graduate of the University of Mississippi and the University Of Mississippi School Of Law. He holds a bachelor’s degree in Journalism and Political Science along with a J.D degree. After completion of Graduation, Roger Wicker joined the United States Air Force as an officer. He worked as an officer for four years from 1976 to 1980. In 1980 he became a member of the Air Force Reserve and retired as a lieutenant colonel after 23 years in 2003.

Sen. Wicker took Trent Lott’s Senate seat in 2008 after he resigned. He ran for re-election for a full term in 2012 and won the Republican primary by a good margin and general elections by getting 57% of the votes.

Wicker has also served as a judge advocate in his professional career. In 1980, Wicker decided to enter politics.

Sen. Wicker authored the SHIPS (Securing the Homeland by Increasing our Power on the Seas) Act. This Act was made a law by President Trump and is now a part of the National Defense Authorization act.

Sen. Wicker was honored by the NAM (National Association of Manufacturers) for his work to create better policies for manufacturers.

Sen. Wicker was criticized in 2006 after securing an earmark of $6 million for a defense company (Manassas-based Aurora Flight Science) whose executives were Wicker’s top campaign contributors.

Sen. Wicker was among the many Senators who were criticized for co-sponsoring the Israel-Anti Boycott Act in 2017.

According to opensecrets, Roger Wicker’s net worth is estimated to be around $1.4 Million as of 2018.

Sen. Roger Wicker has earned a good reputation among Mississippians for his activeness in efforts to fight heart diseases, diabetes, childhood obesity and Alzheimer’s. He was recognized as a champion of polio eradication.

He voted against creating an independent commission for the investigation of the 2021 U.S. Capitol attack. We are yet to see more of Roger Wicker in the Senate.