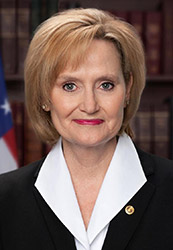 Hyde-Smith was Born in Brookhaven, Mississippi. She went to Copiah–Lincoln Community College for an Associate of Arts (AA) degree. She earned the degree of Bachelor of Arts (BA) from the University of Southern Mississippi.

Cindy is the first woman elected as Mississippi Commissioner of Agriculture and Commerce. She ran for the U.S senate in 2011. She won re-election in 2015.

Hyde-Smith has represented the 39th District for 12 years as a member of the Mississippi. She started her career as a Democrat then switched to the Republican Party in 2010. She is the first woman elected as Mississippi Commissioner of Agriculture and Commerce.

Sen. Smith’s political career started in 1999. She got elected to the Mississippi State Senate as a Democratic candidate. She was a member of the Mississippi Senate from 2000 to 2012. She had a conservative voting record.

Sen. Smith announced her switch to the Republican Party in 2010. On March 21, 2018, Thod Cochran resigned from his seat in the U.S Senate. Governor Phil Bryant appointed Hyde-Smith to the vacant seat of the U.S Senate. Cindy is the first woman representative of Mississippi in Congress.

The Trump administration did not support this decision because of her past as a Democrat. But Trump endorsed her candidacy.

Cindy has earned awards and appreciation as commissioner of Agriculture and Commerce. She introduced policies and practices for balance in the agriculture and commerce industry.

Cindy was linked with an Anti-black racism controversy. The controversy started during a runoff campaign with Colin Hutchinson in Tupelo, Mississippi. The comment from Hyde-Smith “If he invited me to a public hanging, I’d be in the front row” brought a lot of criticism.

On November 15, 2018, another controversial video appeared and went viral. It was a clip of Hyde-Smith in which she appeared to say that it would be “a great idea” to make it more difficult for liberals to vote.

In August 2018, Hyde-Smith was criticized because she co-sponsored the Israel Anti-Boycott Act.

According to Political Saga, Cindy Hyde-Smith has a net worth of around $8 Million as of 2021.

Sen. Smith won re-election for Mississippi in 2020. She has earned a good reputation among Mississippians for her legislative work to improve their life. She was in some controversies but those did not affect her career.