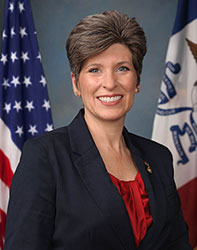 Contact Senator Joni Ernst (R-IA)
Joni Kay Ernst is an American politician and veteran serving as the junior United States Senator for Iowa since 2015. A Republican, she served in the Iowa State Senate from 2011 to 2014. Ernst served in the Iowa Army National Guard from 1993 to 2015, retiring as a lieutenant colonel.

Senator Joni Kay Ernst is an American Politician and former military combat veteran. She is serving as a junior U.S. Senator for Iowa under the Republicans since 2015. She has served in the Iowa State Senate from 2011 to 2015. Ernst is the first female combat veteran to serve in the U.S. Senate. She retired as a lieutenant colonel after serving in the Iowa Army National Guard from 1994 to 2015.

Ernst was born in Red Oak, southwestern Iowa, on July 1st, 1970. She graduated with a bachelor’s degree in Psychology at Iowa State University in 1992. She furthered to earn an M.A. in Public Administration at Columbus State University.

While at Iowa State University, Ernst joined the Reserve Officers’ Training Corps program. After graduating, she joined the U.S. Army Reserve. At the Iowa Army National Guard, Ernst became a logistics officer. She later became the lieutenant colonel. In 2003, she served as a company commander in Kuwait.

She was also the commanding officer of the Iowa Army’s largest battalion at Camp Dodge. She retired as a lieutenant colonel in 2015

Ernst worked tirelessly to bolster job creation and economic development in Iowa. She also fosters the improvement of education and quality of life.

She has also worked to improve general healthcare and access to quality healthcare in Iowa. She supported the reforming of Medicare and Medicaid, including partial privatization of both programs. But, she worked towards repealing the Affordable Care Act.

She has sponsored and cosponsored many Acts and reforms to support gun rights. Ernst supported open carry legislation for guns to be carried in public

Ernst mentioned her experience in the U.S. military during one of her campaigns in 2014. While recanting her experience, she mentioned she had suffered sexual harassment during her decades of service in the military. She also claimed to have suffered abuse from her ex-husband.

Ernst was part of 47 Senators Republican Senators who wrote to Iran’s leadership. The letter was about a nuclear deal with Obama’s administration. The senators warned the Iran government of signing any nuclear deal without congressional approval, stating that it is a mere executive agreement. But, the letter caused a backlash from both the Obama administration and members of congress.

Ernst’s worst year during her political career was in 2020. Tagged as one of the worst debates in Iowa history, Ernst suffered a humiliating soybean blowup during one of her debates. Apparently, the soya bean is the most important cash crop for her state. Yet, she does not know its price breakdown. She also faced allegations over some hidden source of income and source of funding for the campaign