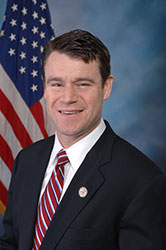 contact senator Todd Young (R-IN)
Todd Christopher Young is an American politician serving as the senior United States Senator from Indiana since 2017. From 2011 to 2017 he was the U.S. Representative for Indiana's 9th congressional district. Young is a member of the Republican Party.

Senator Todd Christopher Young is an American lawyer and politician. He is serving as a senior U.S. Senator for Indiana under the Republicans since 2017. He was a member of the U.S. House of Representatives from 2011 to 2017.

Young was born on August 24, 1972, in Lancaster, Pennsylvania. But, he moved to Hamilton County years later. He enrolled at Carmel High School, where he graduated in 1990.

After his graduation, Young trained for half a year at the Basic School, Quantico. He earned an MBA from the University of Chicago in 2000. He left active service with the rank of captain in 2000. After leaving service, Young furthered to earn his M.A. in American politics at the University of London’s Institute of United States Studies in 2001.

Crapo then traveled across Europe to study the economic transition of some Eastern European countries. He also taught public affairs at Indiana University. During this time, he also goes to law school at night. In 2006, he earned his J.D. from the Indiana University School of Law. He subsequently started practicing at Paoli’s Indiana-based Tucker and Tucker P.C.

Young started his political career as a staffer for U.S. Senator Richard Lugar. In 2003, he volunteered for Mitch Daniel’s governorship campaign. He was a delegate to the Indiana state convention for Republicans. He was also an Assistant Deputy Prosecutor for Orange County, Indiana, from 2007 to 2010.

In 2010, Young ran for the U.S. House of Representatives from the Ninth District. He received endorsements from several political figures. He won the race and was reelected in 2012 and 2014. Rather than run for reelection into the House of Reps in 2016, Young announced his intention to replace retiring Senator Dan Coats.

After successfully winning the primaries, he defeated Democrat Evan Bayh to assume the seat

As a Senator, Young has sponsored and cosponsored several laws, including bills and reforms supporting human and child rights and LGBT rights. His administration also fostered state and national security, immigration acts, and foreign policies.

Young is a pro-life and anti-abortion advocator. He is endorsed with a 100% rating by the pro-life committee, NRLC. He was also a cosponsor of law to defund Planned Parenthood.

Young voted in favor of the act to prohibit discrimination on sexual orientation. But, he believes the state should make its decisions on same-sex marriage.

Young has always stood with efficient enforcement of the law. He supported the Police Mental Health Bill, which Trump signed into law. He was also a cosponsor of the Endless Frontier Act

Indiana veterans condemned Young for supporting the ban on gays in the military. He was also criticized for his history of turning his back on the Indiana LGBT community.

Young portrayed himself as an ambitious politician who always wants the best for his people. But, his public accounts detailing both his personal and campaign accounts are different.

The Federal Electoral Commission has also fined him thousands of dollars for sloppy campaign practices. He has also bounced a check of $4,000 for tax. Young was also accused of several financial misappropriations from Democrat opponent Evan Bayh