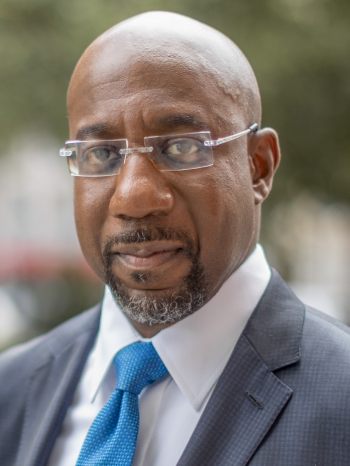 Know more about Senator Raphael Warnock(R-GA)
Raphael Gamaliel Warnock is an American pastor and politician. He has been the senior pastor of Ebenezer Baptist Church in Atlanta since 2005. Warnock came to prominence in Georgia politics as a leader in the campaign to expand Medicaid under the Affordable Care Act.

Senator Raphael Gamaliel Warnock is an American politician and pastor. He is serving as a junior U.S. Senator from Georgia under the Democrats since 2021. He is a senior pastor of the Ebenezer Baptist Church in Atlanta, Georgia.

Warnock was born in Savannah, Georgia, on July 23, 1969. He was born to a war veteran dad where he grew up to learn auto mechanic works. He also learned to weld and later opened a junk car restoration business.

Warnock graduated from the Sol C. Johnson High School. He later enrolled at Morehouse College, where he earned a B.A. degree in Psychology in 1991. He also enrolled in an early college course at Savannah State University. He furthered and received a Master of Divinity, Master of Philosophy, and Doctor of Philosophy degrees from the Union Theological Seminary. Senator Raphael Warnock started his missionary work as a youth pastor. He then became an assistant pastor at the Abyssinian Baptist Church of New York. He became a senior pastor at the Douglas Memorial Community Church in the 2000s.

In 2005, Warnock became a senior pastor at the Ebenezer Baptist Church in Atlanta. During his missionary work as a pastor, Warnock advocated for clemency for Troy David. He also delivered the benediction for the inauguration of former President Obama.

Senator Raphael Warnock started his political career as a leader in the campaign for the expansion of Medicaid in Georgia. In 2015, Warnock considered running for a seat at the U.S. Senate in the 2016 elections. But, he backed off on his decision. Subsequently, he became the chairman of the New Georgia Project. The organization focused on voters’ education and registration.

In 2020, Warnock decided to run for a seat at the U.S. Senate once again. Fortunately, several congressmen, including Chuck Schumer, Booker, and former Presidents Obama and Jimmy Carter, endorsed him. He defeated Loeffler with 51% of the votes to become the first Black Senator from Georgia.

Warnock has been an advocate of quality and affordable healthcare. Before his time at the senate, Warnock fought for the expansion of healthcare coverage. He also worked toward financial and economic development for Georgians.

Among several of his renowned Legislative achievements is his work on voting rights. He has passed bills and reforms to expand voting rights in the state. He was also a critical element in the new election laws passed in his state.

In his support for human rights, Warnock supported the Equality Act. The Act prohibited discrimination on sex, race, gender, or sexual orientation.

Warnock was also accused of running over his wife’s foot with his car. Ndoye, Warnock’s ex-wife, revealed this after their divorce. But medical professionals found no sign of injury. After the general election, Warnock was also criticized for eating pizza with a fork and for hating puppies.

According to opensecrets, Senator Warnock has an estimated net worth of $800,000. Apart from his earnings as a politician, he also has a retirement account with over $500,000 asset value.