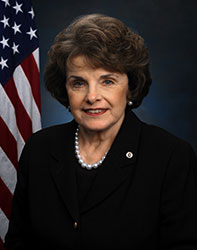 Contact Senator Dianne Feinstein (D-CA)
Dianne Goldman Berman Feinstein is an American politician who has served as the senior United States Senator from California since 1992. A member of the Democratic Party, Feinstein was Mayor of San Francisco from 1978 to 1988.

Senator Dianne Goldman Berman Feinstein is an American politician. She has been serving as a member of the U.S. Senate under the Democrats since 1992. She was also the Mayor of San Francisco from 1978 to 1988.

Dianne was born in San Francisco on June 22, 1933. She graduated from Covenant of the Sacred Heart High School in 1951. She proceeded to earn her B.A. in History at Stanford University in 1955.

She has filed the initial Election Commission paperwork needed for re-election in 2024. She is California’s longest-serving Senator and also oldest sitting senator at age 88.

Senator Dianne Feinstein has built her reputation in U.S. politics as a strong and independent voice. She has worked hard to find solutions to problems facing Californians.

Since she was elected in 1992, Dianne has recorded a significant legislative achievement. She secured billions of dollars for the development of the Californian community. She also contributed to the improvement of tech and healthcare across the U.S.

Among her notable legislative achievements was her quest for the enaction of stricter gun control laws. To improve security, she wrote and passed a 10-year ban on assault weapons in 1994. She also continues to be an advocate of proper gun laws.

Dianne created the national AMBER Alert Network aimed at finding abducted children. She is one of the few running senators that voted for authorizing the Iraq war in 2002.

Feinstein sponsored the Desert Protection Act. Regarded as the largest designation in the U.S., the act protected more than 7 million acres of land. This act also aided the creation of three national parks in the Californian Desert.

Dianne was a leading voice in the legalization of gay marriage. She also voted against the Defense of Marriage act to ensure rights for the LGBT community.

While serving as a top Democrat at the Senate Judiciary Committee, Dianne reformed criminal law, immigration, and civil rights. She also worked hard to strengthen national security. She also fought for the prohibition of human, sex, and drug abuse and trafficking.

Feinstein’s age has been a question in her political effectiveness. She was rumored to have a diminished short-term memory. While interrogating Twitter CEO Jack Dorsey in 2020, Feinstein asked him the same question twice without realizing it.