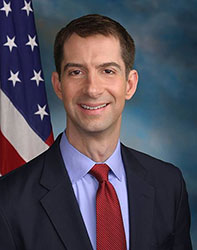 Contact Senator Tom Cotton (R-AR) political views
Thomas Bryant Cotton is an American politician. A member of the Republican Party, he served in the U.S. House of Representatives from 2013 to 2015, and has served as the junior United States Senator from Arkansas since 2015.

who is Tom Cotton?

Tom Cotton (Republican Party) is a member of the U.S. Senate from Arkansas. He assumed office on January 6, 2015. His current term ends on January 3, 2027.

Cotton (Republican Party) ran for re-election to the U.S. Senate to represent Arkansas. He won in the general election on November 3, 2020.

Cotton won election to the seat formerly held by Democrat Mark Pryor in 2014. The 2014 race between Cotton and Pryor was rated a toss-up by both Cook Political Report and Sabato’s Crystal Ball. Additionally, FiscalTimes listed it as one of the seven most vulnerable seats in the country, and The Washington Post included it on their list of the top 10 races to watch in 2014.

In 2015, Cotton wrote a letter to political leaders in Iran, signed by a majority of Republican senators, stating that any nuclear agreement between President Barack Obama (D) and Iran, if not ratified by Congress, would be considered an executive agreement subject to change by future presidents or congressional votes.

Cotton is a former member of the U.S. House. He represented Arkansas’ 4th Congressional District from 2013 to 2015. Upon taking office, Politico named him the freshman “most likely to succeed.” Cotton was endorsed by groups affiliated with the tea party movement, including the Tea Party Express.

Based on analysis of multiple outside rankings, Cotton is an average Republican member of Congress, meaning he will vote with the Republican Party on the majority of bills.

Excerpt: “As an Army officer, I took an oath of office to defend the Constitution against all enemies, foreign and domestic, and I administered that oath to many soldiers. I will proudly take the same oath as your congressman…”

Excerpt: “Beware of politicians who promise to create jobs, because only businesses and entrepreneurs—not politicians—can create jobs.”

Stop the Spending and Cut the Debt

Excerpt: “Our country faces a debt crisis because of Washington’s reckless spending and borrowing. The federal debt is now $15 trillion, the size of the entire American economy.”

Excerpt: “Our taxes are too high and too complicated. The individual and corporate tax codes distort the financial decisions of individuals and businesses, leading them to base spending, investment, and saving on tax considerations, not economic benefits.”

Excerpt: “ObamaCare is a job-killer, a health-care disaster, and an assault on liberty. I will fight to repeal and replace ObamaCare with free-market reforms that empower patients and doctors to make health-care decisions.”

Excerpt: “America has the world’s largest fossil-fuel reserves in the world. I view our fossil fuels as a valuable asset to be used, not an embarrassing liability to be restrained. In Congress, I will support policies that unleash our energy producers, put America on the path to energy independence, and reduce our dependence on unreliable and hostile countries.”

Excerpt: “The foremost responsibility of the federal government is to provide for the common defense.”

Excerpt: “In Congress, I will work to empower parents with better information and more options to make the right choices for their children’s education and I will work to restore local control over our educational system.”

Excerpt: “I will always defend our Second Amendment rights in Congress. As a combat veteran of Iraq and Afghanistan, my soldiers and I kept our rifles and guns within arms’ reach because of a fundamental truth: at critical moments, your life depends on being armed and ready to defend yourself.”

Excerpt: “Strong families are the cornerstones of a strong, free, and prosperous country. As your congressman, I will work to strengthen families and I will stand up for the traditional values I learned growing up on my family’s farm.”

Excerpt: “I understand personally the sacrifices of our veterans and I will always ensure that we honor their service and patriotism.”