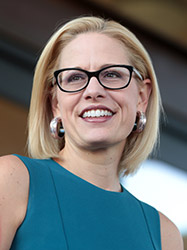 Know more about Senator Kyrsten Sinema (D-AZ) Political Views
Sinema has been described as a centrist or moderate Democrat. According to National Journal's 2013 Vote Ratings, her votes place her near the center of their liberal-conservative scale.

Sinema has been described as a centrist or moderate Democrat. According to National Journal’s 2013 Vote Ratings, her votes place her near the center of their liberal-conservative scale. The National Journal gave her a composite ideology score of 57% liberal and 43% conservative. According to the Bipartisan Index created by The Lugar Center and the McCourt School of Public Policy, Sinema was the sixth most bipartisan member of the U.S. House of Representatives during the first session of the 115th United States Congress. She has cited U.S. Senator Joe Manchin, a Democrat from West Virginia, as a role model. She was one of the most conservative Democrats in the House of Representatives during her tenure.

In 2015 and 2016 she did not vote for Nancy Pelosi for Speaker of the House, and in 2015 only voted with the majority of her party 73% of the time. The conservative group Americans for Prosperity gives Sinema a lifetime 27% rating and the conservative Goldwater Institute gave her a 35% in 2010 when she was a state legislator; the progressive Americans for Democratic Action gave her a 60% liberal quotient. In 2017 she voted in line with President Donald Trump’s position approximately half the time. According to Five ThirtyEight, as of September 2019 Sinema voted in line with Trump’s position on legislation about 53% of the time. In the House of Representatives, Sinema was a member of the Blue Dog Coalition and the Problem Solvers Caucus.

Sinema supports abortion rights. Asked about Roe v. Wade, Sinema indicated that the ruling should not be overturned and that she supports a woman’s right to choose. She has been endorsed by EMILY’s List. She has a lifetime 100% rating from Planned Parenthood, which is pro-choice, and a 20% rating from the anti-abortion organization Campaign for Working Families as of 2018.

Sinema has voted for federal stimulus spending. She has said: “Raising taxes is more economically sound than cutting vital social services.” In 2015 Sinema was one of just seven House Democrats to vote in favor of a Republican-backed bill to repeal the estate tax, which affects about 0.2% of deaths in the U.S. each year (estates of $5.43 million or more for individuals, or $10.86 million or more for couples). That same year she voted to change the Consumer Financial Protection Bureau’s leadership from a single director to a bipartisan commission.

In 2016, with Republican congressman John Katko of New York, Sinema cosponsored the Working Parents Flexibility Act (H.R. 4699). This legislation would establish a tax-free “parental savings account” in which employers and parents could invest savings tax-free, with unused funds eligible to be “rolled into qualifying retirement, college savings or ABLE accounts for people with disabilities without tax penalties”. In September 2018 she voted “to make individual tax cuts passed by the GOP [in 2017] permanent”. She was one of three Democrats to break with her party and vote for the tax cuts being made permanent.

On July 30, 2019, Sinema and Senator Bill Cassidy released a proposal under which new parents would be authorized to advance their child tax credit benefits in order to receive a $5,000 cash benefit upon either birth or adoption of a child. The parents’ child tax credit would then be reduced by $500 for each year of the following decade. The senators described their proposal as the first bipartisan paid parental leave plan.

In 2019 Sinema was one of three Democrats who joined all Republicans and voted against the Green New Deal, a stimulus program that aims to address climate change and, at the same time, economic inequality, while most other Democrats voted “present.” In April 2019, Sinema was one of three Democrats who voted with Republicans to confirm David Bernhardt, a former oil executive, as Secretary of the Interior Department.

In February 2019, Sinema was one of 20 senators to sponsor the Employer Participation in Repayment Act, enabling employers to contribute up to $5,250 to their employees’ student loans.

While a law student at Arizona State University, Sinema organized pacifist protests, including against the Iraq War. She also opposed the war in Afghanistan at the time. Despite having supported the 1991 Gulf War, in 2006 Sinema said she opposed “war in all its forms” After joining Congress in 2012, she said her views on military force had evolved, and that “you should never take military intervention off the table. When you do so, you give an out to a rogue nation or rogue actors.” Josh Lederman of The Hill reported that “she said she favors aggressive diplomacy, crippling sanctions to combat proliferation, and swift, multilateral intervention as a last resort”. Sinema supports the use of military force to stop genocide, such as in Sudan, Somalia and Rwanda. She wrote a doctoral dissertation on the 1994 Rwandan genocide that Lexington Books published in 2015.

After the September 11 attacks on the United States, Sinema was involved in organizing a Phoenix-area group called the Arizona Alliance for Peaceful Justice (AAPJ). According to Lederman, “The group’s mission statement at the time called military action ‘an inappropriate response to terrorism’ and advocated for using the legal system â€“ not violence â€“ to bring Osama bin Laden and others to justice.” Sinema wrote: “As one of the core organizers against the war from day one (September 12, 2001), I have always and will always continue to oppose war in all its forms.”

On September 15, 2018, CNN reported that Sinema, as an antiwar activist in the years after 9⁄11, “led a group that distributed flyers depicting an American soldier as a skeleton inflicting ‘U.S. terror’ in Iraq and the Middle East.” The flyers “promoted a February 2003 rally organized by Local to Global Justice, an anti-war group Sinema co-founded”. Sinema was described in news reports as an organizer and sponsor of the rally and was “listed as the point of contact for the event”. One flyer referred to “Bush and his fascist, imperialist war”, saying, “Government is slavery”, and describing laws as “cobwebs for the rich and chains of steel for the poor”. CNN said that such positions were “a contrast from the more moderate profile she has developed since her 2012 election to Congress”. In October 2018 CNN reported on Sinema’s past activism for progressive causes, “ties to far-left groups” and “extensive past as a progressive activist”, writing, “Her events and associations in opposing the wars in Iraq and Afghanistanâ€”and her early years as a Democratic lawmaker in Arizonaâ€”frequently brought her into contact with the left-wing fringe.” In 2005 and 2006 she co-hosted an Air America radio show with 9⁄11 truther Jeff Farias. Since joining Congress, she has voted against the Iran Nuclear Deal and supported Trump’s missile attack on Syria.

Sinema favors gun control measures such as requiring background checks on gun sales between private citizens at gun shows, and requiring a license for gun possession. In 2016 the National Rifle Association (NRA), which opposes gun regulations, gave Sinema a 29% rating. The Gun Owners of America (GOA) have given her a “D” rating. In 2018 the NRA gave Sinema a 33% score and GOA gave her a 17% rating.

Sinema voted against repealing the Affordable Care Act, but has called for reforms to the law. In a 2012 congressional campaign debate, she said the health care law wasn’t perfect, and that in Congress she would work to amend it to make it work effectively. Sinema voted to delay the imposition of fines on those who did not purchase insurance in 2014. She also voted to repeal the Medical Device Tax and for the Keep Your Health Plan Act of 2013.

Speaking about healthcare policy, Sinema said, “I used to say that I wanted universal health-care coverage in Arizona, which went over like a ton of bricks. Turns out, Arizonans hear the word ‘universal’ and think ‘socialism’â€”or ‘pinko commie’. But when I say that I want all Arizonans to have access to affordable, quality health care, Arizonans agree wholeheartedly. Same basic idea, different language.”

Sinema, then a State Representative, attending a protest at the Arizona State Capitol on the day of the SB 1070’s signing Sinema co-sponsored the Southwest Border Security Threat Assessment Act (H.R. 4482), a bill that calls for border threat analysis of terrorism, smuggling, and human trafficking every five years. Sinema was one of 24 House Democrats to vote in favor of Kate’s Law, a bill that would expand maximum sentences for foreigners who attempt to reenter the country, legally or illegally, after having been deported, denied entry or removed, and for foreign felons who attempt to reenter the country. Sinema voted for the SAFE Act, which expanded the refugee screening process to require signatures from the Secretary of Homeland Security, the Director of the Federal Bureau of Investigation, and the Director of National Intelligence for each refugee entering the country. Sinema opposed Arizona SB 1070. She has argued that mass deportation of undocumented immigrants is not an option and supported the DREAM Act. Her 2012 campaign website stated that “we need to create a tough but fair path to citizenship for undocumented workers that requires them to get right with the law by paying back taxes, paying a fine and learning English as a condition of gaining citizenship.” In July 2018 she broke with her party by voting with Republicans against abolishing ICE. The Federation for American Immigration Reform, a PAC that seeks to limit both legal and illegal immigration, gave Sinema a 33% rating in 2018, and UnidosUS, which supports a pathway to citizenship for undocumented immigrants, gave Sinema a score of 88% in 2014.

In June 2013 Sinema became one of 29 original cosponsors of the bipartisan LIBERT-E (Limiting Internet and Blanket Electronic Review of Telecommunications and Email) Act, along with Representative Justin Amash. The legislation would limit the National Security Agency (NSA) to only collecting electronic information from subjects of an investigation.

In July 2013 Sinema joined a bipartisan majority and voted against an amendment to a defense appropriations bill (offered by Amash) to prohibit the NSA from monitoring and recording details of U.S. citizens’ telecommunications without a warrant.

In 2016 Sinema was one of five House Democrats to vote for a Republican-backed bill barring the Federal Communications Commission (FCC) from regulating broadband rates. Her vote broke from her party; other Democrats were strongly opposed to the measure, and President Obama said he would veto it if it passed. In 2019 Sinema was the sole Senate Democrat not to co-sponsor the Save the Internet Act, which would restore Obama-era regulations preventing ISPs from throttling consumers’ website traffic. She worked with Senate Republican Roger Wicker to develop their own net neutrality bill. Sinema has received $134,046 in donations from the Telecom Industry.