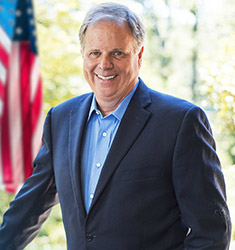 Senator Doug Jones (D-AL) biograph
Gordon Douglas Jones is an American attorney and politician serving as the junior United States Senator from Alabama since 2018. A member of the Democratic Party, he was the United States Attorney for the Northern District of Alabama from 1997 to 2001.

Gordon Douglas Jones (born May 4, 1954) is an American attorney, former prosecutor and politician serving as the junior United States Senator from Alabama since 2018. A member of the Democratic Party, he was a United States Attorney for the Northern District of Alabama from 1997 to 2001.

Jones was born in Fairfield, Alabama, and is a graduate of the University of Alabama and Cumberland School of Law at Samford University. After law school, he worked as a congressional staffer and as a federal prosecutor before moving to private practice. In 1997 President Bill Clinton appointed Jones as U.S. Attorney for the Northern District of Alabama. Jones’s most prominent cases were the successful prosecution of two Ku Klux Klan members for the 1963 Birmingham church bombing that killed four African-American girls and the indictment of domestic terrorist Eric Rudolph. He returned to private practice at the conclusion of Clinton’s presidency in 2001.

Jones announced his candidacy for United States Senate in the 2017 special election following the resignation of Republican incumbent Jeff Sessions to become U.S. Attorney General. After winning the Democratic primary in August, he faced former Alabama Supreme Court Justice Roy Moore in the general election. Jones was considered a long-shot candidate in a deeply Republican state. A month before the election, Moore was alleged to have sexually assaulted and otherwise acted inappropriately with several women, including some who were minors at the time. Jones won the special election by 22,000 votes, 50%â€“48%.

Jones is the first Democrat to win statewide office in Alabama since Lucy Baxley was elected President of the Alabama Public Service Commission in 2008. Democrats had not represented Alabama in the U.S. Senate since 1997, when Howell Heflin left office. Richard Shelby was elected to the Senate as a Democrat in 1992 but switched to the Republican Party after the 1994 Republican Revolution, when the party won a majority of seats in both chambers of Congress; Shelby was the last Democrat to win a statewide federal election in Alabama until Jones did.